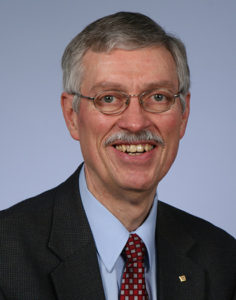 Delivered at the Celebration of Life Service at Covenant Presbyterian Church

How does one find the right words to capture the essence of Bob Lorenz?  “Special”, “unique”, and “one-of-a-kind” are certainly among the terms that come to mind, but they don’t come anywhere close to capturing the breadth and depth of the very singular man that all of us knew.  I have had the privilege of knowing Bob for almost all of my professional life.  I first met him over 35 years ago soon after he had joined the mechanical engineering faculty here at UW-Madison.  He had become actively involved in the then-new university-industry consortium named the Wisconsin Electric Machines and Power Electronics Consortium (WEMPEC for short).  I was working in industry at the time, but it didn’t take long for me to tell that Bob was no ordinary young faculty member, and that he was destined to leave a special mark in our field, which is exactly what he did.

My close association with Bob began 20 years ago when I left industry and joined the electrical engineering faculty here at UW and I, too, became heavily involved in the WEMPEC Consortium.  I have had the special privilege of working very closely with Bob as a fellow co-director of WEMPEC for the past 12 years during which we developed a strong technical partnership and a close personal friendship.  Bob was absolutely and completely dedicated to WEMPEC and I, like all of the other WEMPEC-affiliated faculty members, were in awe of the energy and diligence that Bob invested in maintaining and strengthening WEMPEC’s international reputation as one of the strongest university programs in our field anywhere in the world.  Bob and WEMPEC were almost synonymous.

Rather than trying to describe Bob’s many technical accomplishments, I would like to share my observations on Bob’s role and reputation at the university and, more specifically, in WEMPEC.  Bob was passionate about his guiding principle that WEMPEC is more than a center of technical excellence;  WEMPEC is a family whose members really care for each other.  Bob was always the one to remind us of this fact and to set the example for the rest of us.  Accordingly, he reveled in the large numbers of US and international students that WEMPEC attracted to Madison from the four corners of the earth, and he went to great lengths to make certain that they all felt welcome and appreciated as members of our special community, even if they were thousands of miles from their homes.

Bob always had a large group of graduate students that he supervised, often numbering 25 or more, which is about 4 times higher than the average for a faculty member in our College of Engineering.  Despite this heavy load, Bob always found the time to get to know each of his students and their families on a personal basis.  The annual holiday parties that Bob and Sally held every December were legendary and filled their home to the brim with laughter and holiday cheer.  Despite his failing health, Bob, with Sally’s help, managed to hold a modified version of his holiday party as recently as two months ago, a fitting tribute to the depth of commitment he had to his students.  In fact, as Sally knows, it was only the onset of a major snowstorm that prevented Bob from attending and leading a PhD preliminary exam for one of his grad students only 4 days before he left this world.  That was classic Bob right to the end.

In the classroom, Bob was a natural-born proselytizer.  If there was an undergraduate sitting in the back of the room staring at his cell because he really didn’t want to be taking his class, Bob took it as his mission and personal challenge to convince that student that electric machines and controls were the most important technologies ever invented!  He didn’t always succeed, but sometime he did.  It’s a fact that some of his best graduate students were those he first identified and nurtured when they were taking his class.  Bob was similarly single-minded and persuasive when faced with the challenge of convincing skeptical sponsors about the importance and potential of his latest technical breakthroughs.  Here again, he didn’t always succeed, but let it be said that Bob’s track record for winning over the skeptics was impressive to the rest of us WEMPEC faculty members by any standards.

Even though I am purposely not dwelling on Bob’s specific academic accomplishments, I want to make it clear that Bob had an incredibly productive career as an engineering scholar and innovator.  He published over 400 papers, supervised more than 200 graduate students, and was granted more than 40 patents.  Lest there be any doubt about Bob’s stellar academic credentials, I am pleased to report that just two days ago it was announced that Bob has been elected to the US National Academy of Engineering, one of the highest honors that an engineer can receive in the United States.  Of course, it is sad and bittersweet that this very special honor was announced only 11 days after Bob left us, but I am still very pleased and touched that Bob’s legacy has been recognized so publicly, even if he can’t be here to enjoy the recognition he so richly deserves for his accomplishments.

Yet, despite the impressiveness of his technical achievements, I feel certain that Bob, if he were still with us, would take even greater pride and satisfaction in the number of lives that he influenced and changed for the better during his time here on earth.  During the past two weeks, I have had the privilege of receiving e-mail messages from many of his former students and professional colleagues who have borne testimony to the tremendous impact that Bob had on their lives.  “Inspiring”, “dynamic”, “enthusiastic”, “passionate”, and “life-changing” were among the phrases that appeared repeatedly in their heartfelt messages.  Although Bob can’t be here to bask in the touching warmth of the spontaneous tributes and memorials that appeared in these messages, all of us here in this room, and particularly those of us who are educators, can and should be inspired by the shining example that Bob set for us throughout his highly active career in academia.

I can attest that Bob had a major impact on my life, inspiring me to strive to be a better teacher, a better research supervisor, and a better person.  I will always miss Bob, but his memory and his legacy will live on with me for the rest of my life, as it will with so many of you in the audience and around the world.  So, thank you, Bob, for sharing your uniquely productive and inspiring life so generously with all of us; yours was truly a life well-lived to its fullest.  Now, my friend, rest in peace.  You succeeded in your life-long quest to make the world a better place by your being here.  Now it’s for us, the living, to find our own way to do the same.

Click on the image below for a slide presentation at the 38th WEMPEC Annual Review Meeting, given by Prof. Tom Jahns 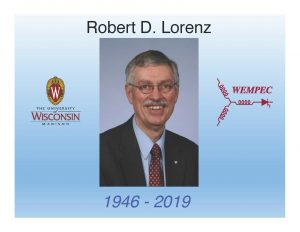 Dynamics and Control of AC Drives