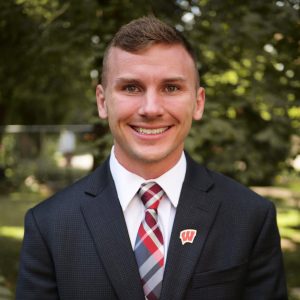 Jacob Yatso’s future came into focus one summer while cutting grass for a local electric cooperative near his home in Oconto Falls, Wisconsin. He’d always enjoyed math and science and wanted to pursue a field that would allow him to use those tools while problem-solving and being creative. After watching engineers work on the electrical system from behind his lawnmower, he decided power engineering was right for him.

“The most intriguing aspect of the field,” he says, “is the constant quest for efficiency and sustainability. There is always an opportunity to do better on both counts.” He hopes he can make a meaningful contribution to the field.

While he’s spent lots of time studying power systems, Yatso has made many contributions outside the classroom. As an undergrad, he was president of the university’s club wrestling team for two years as well as vice president and treasurer of the RecSports executive board. He was active in Badger Ministry and a frequent volunteer for Habitat for Humanity, Badgers for Special Olympics, Healing House Schools of Hope, NewBridge and Hope Worldwide.

In summer 2018, he interned with the Oconto Electric Cooperative and in 2019 with Dairyland Power Cooperative, working closely with planning engineers. During those internships he developed skills that include creating plans and supervising work on transmission and distribution substations.