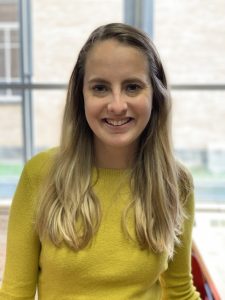 Growing up in Manitowoc, Wisconsin, Marisa Tisler always liked using her hands to build things, like Lego creations and Lincoln Logs. She thought she’d like to be a surgeon, but after starting undergrad at UW-Madison, she soon realized she enjoyed her electrical engineering courses more than biology and chemistry.

After joining the Formula SAE team, which builds an electric racecar each year, she discovered power engineering, which she now studies as a PhD student.

Tisler graduated with a bachelors in biomedical engineering in 2018 and completed a master’s in electrical engineering in 2021. “The power engineering program in WEMPEC is world-renowned so it seemed like an obvious choice to choose UW-Madison for graduate school,” she says. “I continued on with a PhD because I wanted to develop my research skills to be able to tackle ambiguous and open-ended problems.”

In particular, she works on improving electric motors. “My research focuses on supporting wireless power transfer technology as a viable alternative to permanent magnets in the motors found in electric vehicles,” she says. “By removing permanent magnets, without sacrificing machine performance, a motor can be made cheaper and with a lower environmental impact.”

Tisler has had several notable internships, including working with the gate drive design group at General Motors in 2018 and working on circuit reliability analysis at the Jet Propulsion Laboratory in 2019.

She plans to graduate in May 2023, and hopes to find a research and development position in industry focused on renewable energy applications.