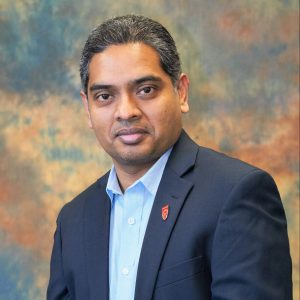 Lav Thyagarajan was in the middle of his career as an electrical engineer when he visited the UW-Madison campus for a short course in the mid 2010s. It was then that he realized he could continue working full time at John Deere in Fargo, North Dakota, while also pursuing graduate education at UW-Madison. “The deep expertise, excellence, passion and accommodating traits of the WEMPEC faculty is what motivated me to pursue my PhD at UW Madison,” he says.

Thygarajan grew up in the Indian state of Kerala and received a degree in electronics and electrical engineering from Mangalore University in 1997. After that, he worked for Honeywell India and ABB in India and Switzerland before taking a position with John Deere in 2010. In his current work, he focuses on non-traditional control and prognostics algorithms in the electrification domain.

He earned his Master’s in electrical engineering from UW-Madison in 2017 and expects to finish his PhD at the end of 2021. His research is focused on extending tools used in the analysis of electrical circuits to the analysis of interconnected electromechanical systems. His new methods yield quicker, simpler results compared to traditional methods and may provide key insights during the design of electro-mechanical systems like electric vehicles.

While he doesn’t have much time for hobbies, Thyagarajan does like spending time with his daughter and taking her and his wife on Harley rides through the countryside. After graduation, he plans to continue his work at John Deere where he hopes to apply the ideas and insights he’s gained and mentor other engineers.