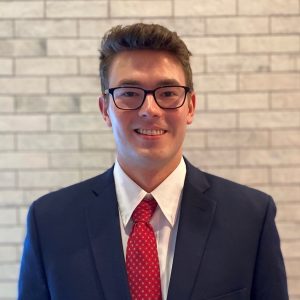 Cameron Perry’s grandfather was a mechanical engineering professor at UW-Madison, so when he enrolled as a freshman he thought he had his engineering path figured out and was set on studying microelectronics. But after taking a couple power engineering classes and reading up on alternative energy and microgrids, he developed a new passion.

“The ability to improve grid stability while distributing the sources of power more evenly through a population is fascinatingly complex,” Perry, from Richland, Washington, says. “I believe that how power is created and delivered is changing faster than it ever has, and I want to be a part of it.”

During his studies, Cameron was active in the IEEE club and served as a student assistant for ECE-342. He prefers to spend his free time outdoors, hiking, skiing, running, backpacking and playing basketball. During the pandemic, he also spent extra time playing video games.

Perry took part in three internships, including one with ANR Group, Inc. assisting on a remediation project to clean up nuclear reactors and facilities used in the Manhattan Project. He also interned at Pacific Northwest National Laboratory in the battery research laboratory and at the Eaton Corporation in Denver, Colorado. There, he worked as a field service engineer, visiting customer jobsites to test and troubleshoot equipment.

After graduating in December, 2020, Perry accepted a fulltime position with Eaton, where he believes gaining experience working directly on large electrical systems will give him valuable insights when he decides to pursue a deeper interest in electrical design.