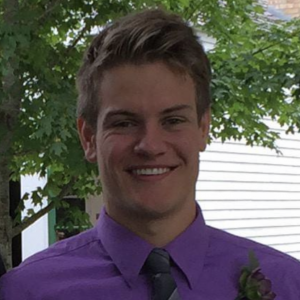 Growing up, Drew Monroe saw the world through an engineer’s eyes. His father, Paul, a UW-Madison mechanical engineering grad, held jobs at several major corporations and would always point out to his son how engineering principles applied to real life. That led to Monroe’s lifelong interest in technology and science and figuring out just how things work.

In particular, it led Monroe, whose hometown is De Pere, Wisconsin, to power engineering, which intrigued him, he says, because “it affects all aspects of modern life.” Every industry relies on power at some level, and he wanted to understand how it is produced and distributed. He also wanted to be part of that world.

That’s why he majored in electrical engineering during his time at UW-Madison, where he also was a member of the UW Lacrosse Club. He worked as an electrical engineer intern at Infinity Machine & Engineering Corporation in De Pere in summer 2017 before spending two summers as an intern with Georgia Pacific. In 2018, he worked at a plant in Bowling Green, Kentucky, designing and wiring up training panels for electricians, and in 2019 he worked as an electrical reliability engineer intern at a paper mill in Savannah, Georgia, overseeing switchgear and transformer upgrades as part of the maintenance department. He also spent time researching the condition of motor cables.

That work led to his current job at Georgia Pacific in Green Bay, which he will begin after graduating with a bachelor’s degree in electrical engineering in May 2020. There, he will be part of the process controls team and hopes to work on the drive systems for the plant’s motors. On his days off, Monroe likes to hang out with friends and family, watch the Badgers, and ride his motorcycle.