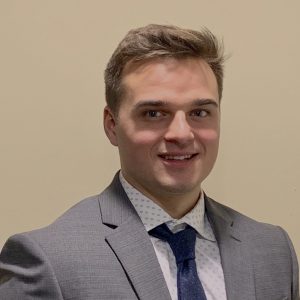 Engineering was a natural choice for Waukesha, Wisconsin’s Riley McCormick. He was always strong in math and science and attended a STEM middle school that sparked his interest in engineering.

But it wasn’t until he interned with electrical contractor NEXT Electric and was first exposed to electrical distributions systems that he became interested in power engineering. That interest deepened after taking ECE 355, Electromechanical Energy Conversion. “This opened my eyes to the aspects of power engineering outside of electrical distribution and started my interest in power electronics and electric machines,” McCormick says.

He participated in two other internships, one with electrical utility WE Energies, where he assisted in management of inspection and maintenance programs and learned the basics of utility-scale distribution systems. The next was with Leonardo DRS, a naval defense contractor, where he worked on the design of switchboards for naval ships and development of uninterruptible power supply for naval applications.

When not working or studying, McCormick participated in intramural basketball and volleyball and is an avid Wisconsin sports fan. In winter, he enjoys skiing and snowboarding.

After graduating with a bachelor of science degree in electrical engineering in December 2020, he began a job with Lincolnshire, Illinois-based Klein Tools. He works on their rechargeable product line, including rechargeable battery powered fans and portable power stations, where, he says, his education in power engineering has already proved invaluable.