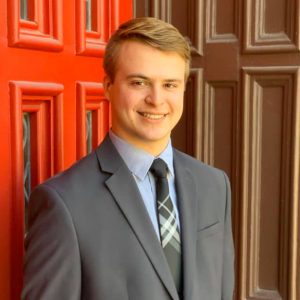 While growing up in Byron, Minnesota, Alexander Laning’s father, a mechanical engineer, took him to his work at IBM several times, sparking a lifelong interest in engineering.

It wasn’t until he was enrolled as an electrical engineering major at UW-Madison, however, that Laning became aware of large, industry-scale power engineering. “I then took a power fundamentals class and discovered how complex and difficult effective power distribution is on a national scale,” he says. “I was in awe that we manage to do it at all.”

Laning decided he wanted to be part of that massive undertaking and began studying power engineering. That included an internship at Neenah, Wisconsin-based Plexus, working on circuit boards that generate complex waveforms.

After graduating with a bachelor of science degree in electrical engineering in the spring of 2020, he took a position with the electrical and industrial tool manufacturer Fluke, based in Everett, Washington. He is currently a hardware engineer focusing on thermal imaging products.

Laning enjoys snowboarding, improving his cooking skills and keeping up with friends in Madison by playing video games. He is also co-leader of Fluke’s community outreach program and has helped organize volunteer events including a college mentoring program and Adopt-a-Road work days.