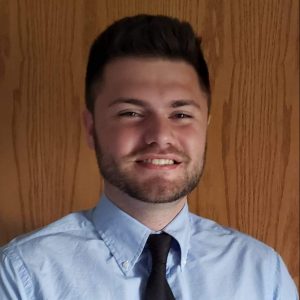 When he was in high school, Nathan Jensen of Kenosha, Wisconsin took a class through Project Lead the Way, a nonprofit program that offers real-world challenges in computer science, engineering and biomedical science. As part of his class, Jensen built a small robotic pick-and-place machine that was used to place surface-mounted components on circuit boards. That experience got Jensen hooked on automation, which led him to the exciting world of power engineering.

What interests him most about the field, he says, is “its importance in everyday life. From large-scale renewable energy to the circuits in mobile phones, [he] enjoys studying and working in a field that has direct impacts on society.”

Currently, Jensen, who graduated in December 2019 with a bachelor’s degree in electrical engineering, works at R+D Custom Automation in Lake Villa, Illinois where he’s continued his fascination with automation. The company specializes in pharmaceutical automation, building machines that create IV bags, pills bottles, and other products for major companies. Jensen works on electrical and pneumatic systems and robots, choosing parts to use in the systems, creating schematics for assembly teams, and programming systems to get them up and running.

When he’s not working on automating industrial machines, he likes checking out the latest consumer electronics, including smartphones and computers and also enjoys biking and gaming.