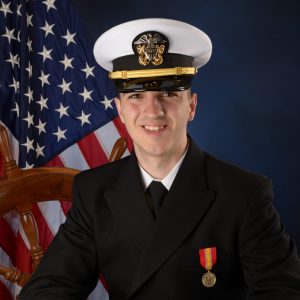 When William Anderson began his college career, he wasn’t sure what he wanted to study. He enrolled as a physics major, but after discovering power engineering, his life took on a definite direction. He’s currently at the United States Navy Officer Candidate School in Newport, Rhode Island, with plans to train as a SWO(N), or Surface Warfare Officer with nuclear training. These officers oversee reactors on aircraft carriers.

When Anderson, a Milltown, Wisconsin native, transferred to the UW-Madison electrical engineering program from UW-River Falls in 2017, he actually didn’t know much about the field, but he was intrigued by the basic science. “Since current flows and magnetic fields aren’t visible,” he says, “electrical engineers have to focus heavily on theory,” a challenge which attracted him. He chose power engineering, in particular, because he has a strong interest in clean energy.

In Summer 2019, he participated in an internship in the new product development department at Miller Electric in Appleton, Wisconsin. There, he got hands-on experience updating the specs of commercial welding equipment and designing safety circuits and bleeder circuits for a testing machine.

He graduated from UW-Madison with a bachelor’s of science degree in electrical engineering and applied those transfer credits to a bachelor’s of arts degree in applied physics for industry and engineering at UW-River Falls in December 2019.  After he completes his service in the Navy, Anderson plans to earn a master’s degree in power engineering and work on a clean power project, hopefully something in fusion. His life’s goal, he says, is to create a more sustainable future and to reduce humanity’s energy footprint.

When he’s not tinkering with circuits or nuclear reactors, Anderson spends his time weight lifting, playing any and all sports, and spending time in the outdoors.